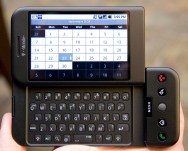 Seven years ago today I was a guest on the MobileAppsToday Podcast and talked about the T-Mobile G1, which was the first Android smartphone. Tonight I will participate in a seventh anniversary recording, and no doubt we will talk about how Android and the smartphone personal computing market has matured.

In preparation for the podcast I spent some time jotting down some thoughts of how things where then, seven years ago, and how they are now. It occurs to me that what I have are some good topics for a series of blog posts about smartphones as we head towards the end of 2015.

To start, we have to remember back seven years and remind ourselves that in 2008 smartphones as we now know them were very new. Apple had just started selling the iPhone on June 29, 2007. Prior to the iPhone, the iPod was Apple’s most successful consumer device and in fact I recall during that first iPhone announcement Steve Jobs made it a point to describe the iPhone as an iPod that can do more, although that first model only ran web apps and apps specifically written by Apple.

Prior to the iPhone, Microsoft had been selling Windows Mobile smartphones and Pocket PC Phone Editions for several years, Palm had the Treos, and RIM had the Blackberry, all of which enjoyed success selling to professionals and businesses but did not gain a great deal of success in the broad consumer cellphone market.

Perhaps the one device that did have some success with consumers was the T-Mobile Sidekick, also known as the Hiptop Danger, that was released in 2002. The Sidekick had a screen that flipped out from the base to reveal a physical keyboard, its operating system was based on Java and it automatically backed up all personal data to the cloud. For apps the Sidekick featured an instant messaging client that worked with AIM, Yahoo, and MSN, and it along with e-mail were the primary functions of the device along with phone calls.

The Hiptop Danger, which eventually became property of Microsoft, can be thought of as the forefather of the T-Mobile G1. Andy Rubin was a co-founder of Danger and left the company in 2003 to create a new company, which was later acquired by Google. At Google Rubin led the development of a new operating system that would take on the name of his former company, Android.

It should be no surprise that the T-Mobile G1 had similar hardware features to the Danger given Rubin’s prior experience. Further, in 2007 it was widely believed that to be usable for inputting text, a device must have a physical keyboard. At the time, Blackberry was the market leader and had what is still believed to be the best physical keyboards for smartphones.

What was most shocking at the time about the iPhone is that it did NOT have a physical keyboard. Instead, the iPhone had an on-screen keyboard with predictive capabilities to determine the letters and words one intended to type. Despite Steve Job’s claims that with its predictive capabilities the on-screen keyboard could be just as good as a physical keyboard, some people were skeptical.

At the time that T-Mobile began selling the G1 on October 22, 2008, Blackberry, Windows Mobile, and Palm were the incumbents, and the iPhone was the up-and-comer having been sold for just a little over a year. While most people considered the iPhone easier to use than its competition, it was functionally hampered by the web-app model it launched with, but that was corrected in July, 2008 when Apple introduced the iTunes App Store as a means for third-party developers to release standalone apps.

While Apple did finally provide a way for developers to create apps for the iPhone, before an app became available for download it had to be approved by Apple and that process took time and often lead to denials. The first version of Android came with an app store called the Android Market, and Google provided minimal review before placing most apps in the Market. Further, Android had, and continues to have, the ability to directly install apps from third party source web sites or directly from personal computers.

In November, 2008 we saw the beginning of two contrasting approaches to what I like to call the real personal computer market that includes smartphones and tablets. Apple’s approach focuses on providing the best end-user experience by controlling the hardware design (only Apple makes iPhones and iPads) and the software that runs on their hardware. Google’s approach focuses on providing users a wide range of options, allowing for multiple manufactures to sell devices that run Android, and even allowing them to customize some of the appearance of the software to match the manufacturer’s branding.

In November 2015 there are more smartphones running Android world wide than iPhones, while the iPhone may be more profitable for Apple and remains to be in the eyes of most the best smartphone. In fact, it seems as though both company’s strategy is working, and with a market much larger than traditional personal computers, it seems both strategies will enjoy long term success.

Mobile enthusiast and author
View all posts by Frank →
This entry was posted in What. Bookmark the permalink.